I read Out of the Blue: New Short Fiction From Iceland in May 2020. It’s been sitting in the back of my mind ever since; my brain is not quite sure what to make of it. This is not a proper review, like I usually write, but a brief explanation of the main take-aways I got from reading this book. 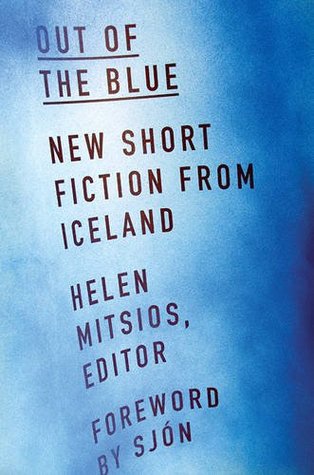 Title: Out of the Blue: New Short Fiction from Iceland

Synopsis: Celebrated in Europe and Scandinavia but less known in the English-speaking world, these writers traverse realms of darkness and light that will be familiar to readers who have fallen under the spell of Scandinavian fiction. While uniquely Icelandic in topography and tenor, with a touch of the island’s supernatural charm, the stories traffic in the enduring and universal complexities of human nature. Here is a fictional universe where the ghosts of Vikings and spirits tread, volcanoes grumble underfoot, and writers trip the Northern Lights fantastic across the landscape of the Icelandic imagination.

Out of the Blue transports readers to Iceland’s timeless and magical island of Vikings and geographical wonders, and it promises to be a seminal collection that will define Icelandic literature in translation for decades to come.

This collection lives up to its name of being out of the blue. Now that I have read the book, I can’t remember what list I first saw it on which made it catch my attention. For some reason (probably the fact that I hoped I would get to know the country and landscape of Iceland better), it did, and on something of a whim I suggested that my library purchase it. I didn’t really think that they would, since it is just barely new enough to be in the window of possibility and I couldn’t even tell where it was published. Lo and behold, the library did decide to purchase two copies, and because I suggested it, they sent one to me as soon as it came in. The stories within are just as unexpected as the fact that the book even showed up on my shelf.

Because of the international and culturally serious nature of this book, I do not feel that I am qualified to write a proper review. I’ve had a lot of thoughts and feelings about it swirling around, so even though it may not give a ton of insight I want to share just a few of my thoughts on this collection.

This is far from the way my normal reviews go, but it is the best that I can do for such a weighty book that is definitely outside of my wheelhouse. I’m glad I read it, but a lot of it was not enjoyable and I don’t think that I will ever read it again. I would recommend it to anyone with an interest in Western-but-not-American literature, Nordic literature or folk tales, or Iceland specifically.

What is your favorite book written about/by an author from another culture?