I have held off on posting this book review because I want to be entirely fair with it. Somehow, that has been difficult to maintain while writing. This book was not what I expected, and at times I have found myself falling towards one or another of a few extreme positions: from one that is entirely critical, to another that glossed over most of the concerns I have. I think I have finally found a fair balance, although I have definitely ended up much closer to one of these extremes than the other. 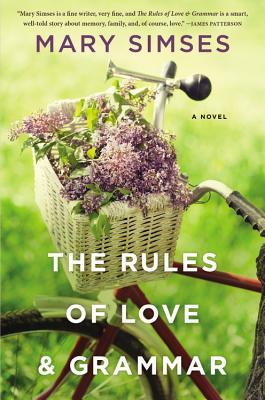 Title: The Rules of Love and Grammar

Synopsis: Newly jobless, former technical writer Grace Hammond is unmoored. Desperate to escape the city and her problems, Grace hits ‘pause’ and returns to her Connecticut hometown, where she discovers that the answers to what her future holds might be found by making peace with-and embracing-the past. As Grace sets out to correct her mistakes and come to terms, finally, with her sister’s death, she rekindles a romance with her high school sweetheart, Peter, now a famous movie director, and finds herself sparring with Mitch, who works at the bike shop. Torn between the promise of a glamorous life and the allure of the familiar, Grace must decide what truly matters, and how to move on without forgetting where she came from.

If I were to only use one word to describe The Rules of Love and Grammar, I would have to use underwhelmed. Part of this has to do with my own misplaced expectations, but most of it is in the characterization. From the very beginning I struggled to sympathize with Grace (the protagonist). “Surely,” I thought in the first chapter, “she will become more palatable and understandable as the story progresses and I learn more about her.” This is not the case. Throughout the story, Grace uses people, maintains a selfish attitude, sees every other woman close to her age (except her best friend) as an enemy, and generally acts out of desperation rather than utilizing any meaningful thought process. What makes this even worse is that she isn’t alone. Most of the characters have a similar outlook and motivation, so they act similarly. The underlying morals that enable this are disappointing at best.

As for the plot and message of the story, this is where I only have myself to blame for being disappointed. I expected a Hallmark-style romance: something cute and lighthearted, set in a charming little town on the beach which acts like a character itself. I anticipated destiny, true love, and strong friendships. But, romance is not the main focus of this book, despite the word “love” in the title. This is a book about healing from tragedy, lingering grief, and the importance of maintaining family connections when circumstances try to tear you apart. Romance is secondary. These themes are important, but finding out that this story is anything but lighthearted was a bit of a shock.

When the romance does come into play, it feels forced. There is a love triangle, a series of misunderstandings, and a frequent pitting of one person against another. I did not like or agree with any of Grace’s actions in this realm. The only character I truly enjoyed getting to know is Mitch, and despite being a part of the triangle, he spends most of his time in the background or being unreasonably berated by Grace. I never really figured out the other corner of the triangle, Peter, either. His relationship with Grace is unclear, and even two weeks after finishing the book (and, yes, stewing over it a bit), I don’t understand why Grace ends up mad at and saying she is hurt by him…I really can’t explain this part without some moderate-to-significant spoilers, so if you’re interested, shoot me a message. Or if you’ve read the book and understand this, help me to understand, too!

In contrast to most of the elements of this book, the setting is well done. It doesn’t quite reach my Hallmark-level expectations, but it is good. I could hear the ocean waves in the background and imagine the intricate houses Grace’s mom designs. Characters talk about how the town is now and how it used to be, so we get a full picture of how it has fared over the years.

Ultimately, this book disappointed my expectations, and it wasn’t done well enough to let me forget my expectations. Even Grace’s characterization is confusing. You could really do a lot with a character who is obsessed with order and finding typos “in the wild,” but the only time these characteristics come up are when they make her look silly. I would have enjoyed seeing more of Grace’s editor side, and less of her snobby competitive side. Even the side characters are all annoying. That is not a hyperbole – I cannot think of a single side/minor character who did not annoy me. They didn’t all annoy me all of the time, but they all had at least one moment of being obnoxious.

When I finished reading The Rules of Love and Grammar I thought I kind of liked it, and just had a few qualms. Now that I’ve written this review I realize just how many issues I actually have with it. I would understand if you thought that I did not like it at all, now that I have re-read my review a few times. That isn’t quite true though. Based on this I am going to tentatively give The Rules of Love and Grammar three stars, with the understanding that I might re-adjust that the longer I sit with my thoughts on it.

What do you think, Readers? If you’ve read this book, do you think my review is fair? My mind is entirely open to being convinced that the characters are better than I read them, but until such a time comes I am standing on what I’ve written. If you would like to discuss this or any other aspect of my review, leave a comment!

I hope you have a good weekend, Readers!

2 thoughts on “Book Review: The Rules of Love and Grammar by Mary Simses”