Happy Friday, Readers! How quickly things can change in a week. Last Friday I had a scheduled day off, and was disappointed that it was raining too hard to take my nephews to the zoo, and today marks day five of the library being shut down. Everyone I know seems to be holding up pretty well, but it’s still a moderately intense situation.

However, if you’re stuck at home, this is a great time to catch up on reading! Today I’m sharing my review of one of my new favorite books: The Guernsey Literary and Potato Peel Pie Society. I highly recommend reading (or listening to the audiobook) this as a temporary antidote to current events. 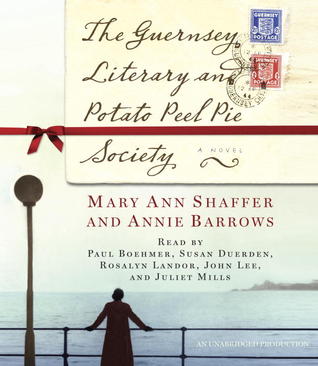 Synopsis (from Goodreads): January 1946: London is emerging from the shadow of the Second World War, and writer Juliet Ashton is looking for her next book subject. Who could imagine that she would find it in a letter from a man she’s never met, a native of the island of Guernsey, who has come across her name written inside a book by Charles Lamb….

As Juliet and her new correspondent exchange letters, Juliet is drawn into the world of this man and his friends—and what a wonderfully eccentric world it is. The Guernsey Literary and Potato Peel Pie Society—born as a spur-of-the-moment alibi when its members were discovered breaking curfew by the Germans occupying their island—boasts a charming, funny, deeply human cast of characters, from pig farmers to phrenologists, literature lovers all.

Juliet begins a remarkable correspondence with the society’s members, learning about their island, their taste in books, and the impact the recent German occupation has had on their lives. Captivated by their stories, she sets sail for Guernsey, and what she finds will change her forever.

Written with warmth and humor as a series of letters, this novel is a celebration of the written word in all its guises, and of finding connection in the most surprising ways.

Content to be aware of: A few distatesful (but fairly well veiled) references, occasional strong language, mentions of war and brief descriptions of life in a concentration camp

The Guernsey Literary and Potato Peel Pie Society is an epistolary novel, meaning that it is written as a series of letters (and telegrams, journal entries, and occasionally other written communication). Personally, I tend to find it difficult to connect with characters when we only learn what they share with other people, not what they really think or feel inside. However, this book conveys such a variety of communication that we actually do get a reliable picture of most characters.

I listened to this as an audiobook, which is an unique experience. A full cast participated, meaning each character had their own voice. The voice actors did a marvelous job conveying their personalities and matching their voice to what they conveyed.

Along with Juliet (our protagonist), I loved learning about how the people of Guernsey lived during the German occupation of WW2. I’m not as good at geography as I used to be, so I didn’t immediately know where Guernsey is, or anything that happened there during the war. Although this is a novel, I learned about a place in the world and its history which I otherwise would have been ignorant about.

There are so many things I loved about The Guernsey Literary and Potato Peel Pie Society. Unfortunately, it was entirely solid gold, and there are a few letters which I wish had been left out. They didn’t ruin the entire story for me, but the few distasteful stories and references are enough to keep this from being a runaway favorite. Also, while the language in the book is not overwhelmingly poor, if you don’t want to read any strong language, then this will not be an option.

I enjoyed listening to this audiobook very much! The story is complex: in “current” time we learn about Juliet’s literary career following a successful journalism stint during World War Two, and we follow her personal life through letters to and from both old friends and new acquaintances; we also learn how the island of Guernsey and its residents lived during the war. All of the characters are wonderfully developed and fun to get to know. Ultimately, this is a story of hope, love, perseverance, and friendship. Despite being set several decades ago, this is entirely a story for today, combating the same threats of isolation and betrayal that so many people face, and indirectly addressing the weight of serious existential questions. Juliet does not come to the same answers for these questions that I have, but she deals with them honestly and I applaud her refusal to bury or ignore difficult topics.

I thoroughly enjoyed The Guernsey Literary and Potato Peel Pie Society and I am giving it five stars. However, I recognize that it is not a story everyone will enjoy. I recommend it for those who enjoy reading historical fiction set during World War Two, with a note that I am hesitant to recommend it to anyone who usually sticks to Young Adult fiction. The maturity level required to truly get and enjoy this book is a bit higher than that.

A few days ago I read an article mentioning that movies and other media depicting widespread pandemics is surging in popularity. The article went on to discuss possible reasoning behind watching this kind of film while we’re already living out something very similar. While I am still not drawn to that kind of media, I have recently realized that stories of occupation during World War Two seem to resonate even more when I am being encouraged to stay home as much as possible. I’m reading Corrie ten Boom’s The Hiding Place at the moment, and it especially feels oddly relevant. The chapter I read this morning takes place while she is in solitary confinement in her native Holland, which is occupied by Nazi forces. She has come to see the ants in her cell almost as friends, but when they disappear one day she remarks “I too had a hiding place when things were bad. Jesus was this place, the Rock cleft for me.”

The world around me is constantly holding its breath, increasing its heart rate, and living on the verge of collapse. This background lets me appreciate ten Boom’s words and beliefs even more than I expected to when I purchased the book a few weeks ago. As my community hunkers down, I’m reminded that humanity has gone toe-to-toe with evil and other threats before, and survived, not because of anything we can do on our own, but because everything that happens is part of God’s larger story. Yes, I’m washing my hands more often and listening to numerous official news conferences nearly every day. But I’m also taking a deep breath and reminding myself that this did not catch God off guard like it did me. He knows what is going on, and while He weeps with those who weep, He sees the bigger picture and knows how this will work out.

Back to The Guernsey Literary and Potato Peel Pie Society. This is a book for our time, possibly for all time, written during struggle and dealing with the aftermath. It is sunshine and rain at the same time, a love story and a war story. If this sounds like your cup of tea, I hope you will check it out! And if you enjoy audiobooks, I highly recommend you listen to this, as the audiobook is extremely well done.