It’s the first day of fall!! Are you as happy about this as I am (which is VERY), or are you mourning summer? Personally, I adore autumn and everything that comes with it, and can’t wait for the weather here in Oklahoma to catch up with the calendar. I’m sure it won’t happen for a few weeks still, but regardless, I have hung up my “Happy Harvest” wreathe and am totally in the fall mindset.

Today’s post comes from a challenge Kate at Once Upon An Ordinary did a little while ago. She got this fun tag from Abigail at Books, Life, and Christ, and I can’t find who originally created it. The “Do I Have That Book?” challenge is kind of like a shelf tour: it asks a series of questions, which I will answer based on the books that are currently on my physical bookshelves. You can see Kate’s answers here, and Abigail’s here.

Do I Have That Book?

1. A book with tattered edges? 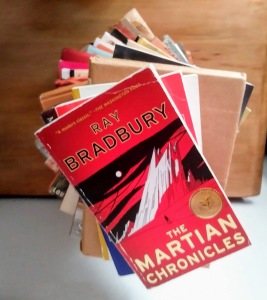 The most tattered book on my shelves is The Martian Chronicles by Ray Bradbury, which I bought used. It’s still holding up well, but has certainly seen better days!

I had to go to nonfiction for this one! Serving With Eyes Wide Open by David Livermore is actually a book I haven’t read; I received it as a gift while doing a missions-oriented internship, and never got past the first chapter.

3. A book based on another fictional story?

Nope! The closest thing I have is a few audiobooks based on fairy tales.

This is such an oddly specific question? But, Jane Austen to the rescue! Persuasion has ten letters.

5. A book with a title that starts and ends with the same letter? 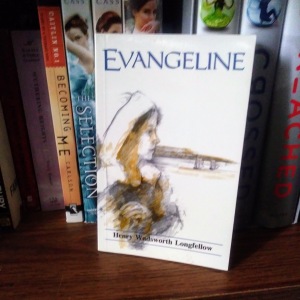 I am surprised at how quickly I was able to find multiple books for this one! I’m going with Evangeline by Henry Wadsworth Longfellow. I don’t think I’ve ever gotten all the way through this, despite starting to read it several times. It isn’t very long so I’m not sure what the issue is. I’ll have to try again sometime soon.

I’ve got about a handful of mass market paperback books, including my beloved Salinger short story collections Nine Stories and RHtRBC&SaI (aka the longest title I own), my copy of Anne of Avonlea which I think I may have taken from my sister? and Elsie Dinsmore, which I still haven’t read by can’t quite bring myself to get rid of.

7. A book written by an author using a pen name?

This one is easy! The Lorien Legacies series, which starts with I Am Number Four, is written by Pittacus Lore. I don’t know the author’s real name, but I am 99% sure it is not Pittacus!

8. A book with the character’s name in the title?

I have several to choose from for this question, but I’m going with a childhood favorite: Saffy’s Angel by Hillary McKay. Saffy is the main character’s nickname; her full name is Saffron (like the color).

Well, no. The vast majority of my books are paperbacks, which don’t often contain maps. Plus, I’m typically not a fan of fantasy books or stories that take place on boats, which seem to be the most common 2-map holders. The closest I could get is my Bible, which has more than 2.

A few others have been turned into movies, but Anne of Green Gables by L.M. Montgomery is the only book I have that has become a TV show.

11. A book written by someone who is originally famous for something else? (Celebrity/Athlete/Politician/TV Personality…)

Nope. Not even my nonfiction section could help me out this time!

Um, no. I can’t even find one with a character wearing a watch on the cover!

As much as I dislike the title, I love the short poems in I Could Pee On This: And Other Poems By Cats. They’re hysterical!

My copy of Fahrenheit 451 by Ray Bradbury has a stamp for winning the National Book Award Distinguished Contribution to American Letters.

15. A book written by an author with the same initials as you?

I already mentioned these in the mass market paperback section, but I have copies of a few of J. D. Salinger’s short story collections.

Again, oddly specific, but no. The closest I can find is my copy of Reached by Ally Condie, which has 512 pages. So close! 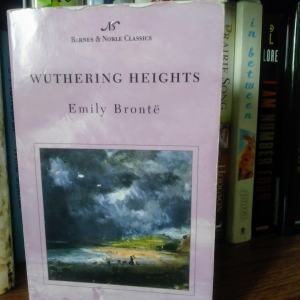 Yes, despite the fact that I don’t actually watch that many movies, I have a couple of these! I’ll go with Wuthering Heights by Emily Bronte just so that I can lament the fact that none of the movie adaptations are any good! At least, none that I have seen, and I have heard other readers agree with me who have watch more than I have. Someone please prove me wrong. If there is an adaptation that you like, please tell me!!

I was so tempted to go with the Bible on this one, but that seemed too easy. So, I’m going with my current breakfast theology read, Hearing God’s Voice by Henry and Richard Blackaby.

13 out of 20 isn’t bad, but I expected to be able to fulfill more of the prompts! Oh well. Someday I might do an actual bookshelf tour, although that will probably wait until I don’t have boxes of books packed away.

I hope you enjoyed this challenge! Feel free to consider yourself tagged, if you want to do it yourself. Now go enjoy the first day of fall, and if you’re happy about it being fall tell me one thing you love about this season! If you aren’t ready for summer to be over, tell me what you’re holding onto about summer as long as possible.

5 thoughts on “Do I Have That Book? Challenge” 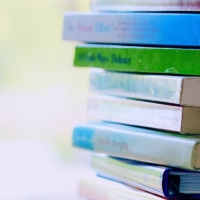 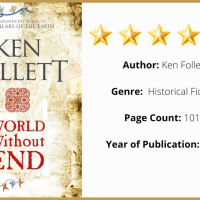