Hey y’all! Today I get to tell you about the latest book by one of my recently minted favorite authors! Souls Astray by Kellyn Roth is full of historical detail, emotion, spiritual tension, and love.

Synopsis: Adele has been lost for a long time now …

Adele Collier has sought a carefree lifestyle ever since her tragic childhood. Determined to never allow anyone or anything to control her life or emotions again, she consistently seeks distraction in gaiety. But shaking her ghosts isn’t as easy as she’d like.

Troy Kee has been alone in the world since the Great War took his parents and left him in care of his younger sister. When she marries, he’s left to seek after his goal of a healthy, complete family. But how can he focus on his dream when trouble plagues his family vineyard?

When Adele and Troy meet, a whirlwind romance begins—but can two lost souls have a healthy relationship?

Content Warnings/Things to be Aware of: Compared to most of the books that I endorse, this one has more difficult content than usual. The author articulates the extent and reasons behind this content in this post, and herself only recommends it to those who are at least 15. The biggest/most difficult thing to me was the extent of verbal abuse and neglect suffered by the protagonist, especially early in the book, but there are additional instances of difficult or mature topics are addressed.

At times this book was difficult to read due to the emotional struggles of the characters, but it is wonderfully written. Each of the characters is so alive, as if this were a novelization of real events rather than fiction. It is so easy to be caught up in the character’s minds and be completely drawn into the story.

That said, the story itself is not entirely pleasant. As a prequel to a series, I understand why things happen the way that they do, but that does not make it any easier to read from an emotional standpoint. I first read Souls Astray a few months ago, and the emotional response it drew from me has lingered. There is a lot of pain and confusion in this book. But, it is set in the 1920s and thoroughly captures the attitude of the Lost Generation. The author has discussed multiple times her inspiration coming from books such as The Great Gatsby, and the more I think back on the story the clearer this becomes. I like the position she writes from and the characters she creates, even if their stories contain more than their fair share of tragedy.

The story is told from two different perspectives, which works very well. We get to see both Troy and Adele grow up and start to figure out who they are going to be, long before they meet one another. Once they do meet, the pace picks up considerably. By having the buildup to their meeting be rather drawn out, we learn to empathize with each character as they face different situations, and understand why they act the way that they do in subsequent portions. This doesn’t mean that we are to agree with everything they do – many of Adele’s actions, especially, are meant to be understood but not condoned. When the inevitable ending comes, it is sudden and harsh, just like life itself. Even though we have gotten to know the characters and how they tend to react to difficulties, it is still a shock.

Surprisingly, my favorite character was one of the side characters rather than a protagonist. Adele’s best friend, Milly, is incredibly sweet and supportive, and I hope that she gets her own book someday! She sees Adele’s pain and struggles, and does everything she can to help out, but she does not give in to Adele’s negative mindset. Milly maintains peace and faith in the midst of Adele’s chaotic life.

Souls Astray is a very real, gritty book. Parts of it are difficult to read; if you are looking for something fun and easy to read, this most likely isn’t it. However, it is a book that makes you think. It makes you look at difficult situations and realize that nothing in the world is as straightforward as we would like it to be. There is a backstory to every decision, real as well as fictional. It is wonderfully placed in history, and I’m sure my readers know that I definitely enjoy a clean romance set in the first half of the 20th century. Emotional content aside, the story is extremely well written: properly structured, appropriately paced, and the author’s voice and style are clear and enjoyable.

There are equally understandable reasons as to why a reader might or might not like this book. I did, but it took me a while to realize it because of my intensely emotional response while reading. I recommend Souls Astray to fans of analytical historical fiction and books that take a good, hard look at what is often glossed over as a character’s backstory.

Now that you’ve heard my take on Souls Astray, here’s a bit of info about the author:

You can find out more about Souls Astray on Amazon and Goodreads.

To enter the giveaway for a signed paperback copy of Souls Astray and a $20 Amazon giftcard, click here!

I hope you’ll check out the other blog tour stops and the author’s site, and consider reading Souls Astray! I’ll leave you with my favorite quote from the book: 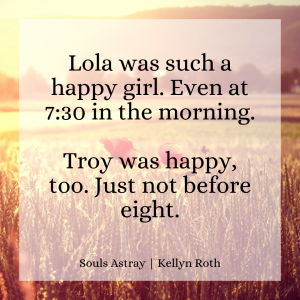